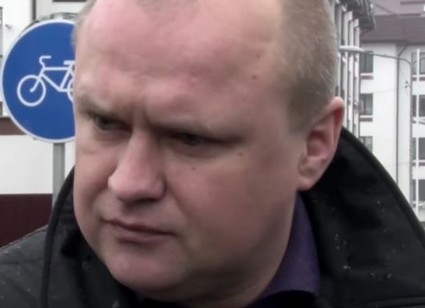 Do not think that the next tranche of the IMF Ukraine covered with a copper pelvis solely because of the blockade of the ORDLO. The tranche was also canceled, and because the IMF does not intend to spend its money on the sacred cause of improving the well-being of high-ranking corrupt officials Konenko and Granovsky and their servants from the special services. For example, Paul Demchin, a thick layer of subcutaneous fat which recently came out brilliant investigation “Slidstva.info.” And it looks very funny on this background the attempts of some Gromadskoy for the sake of the power of the on-board of the SBU otmazat Pasha, on which there is nowhere to put a stigma. The embassy is monitored precisely by the media, and not by pocket scourters of corrupt officials from the Security Service. And Pyotr Alekseevich, in order to get the desired tranche, and, accordingly, a delay in his “care for health”, it would be worth to clean up your own environment from thieves, and at the same time “office” from odious crooks.
We quote “Trace”

First Deputy Chairman of the SBU, headed by the Main Directorate for Combating Corruption and Organized Crime, Pavel Demchin has no property, but his family owns a huge estate and elite cars.

This is stated in the investigation of the program “Slidstvo.Info”.

So, in the paper declaration of Dem’cina for 2015, it is noted that it does not have its own corner, car or savings.

Officially, he lived in a departmental hostel of the SBU.

But at the same time, the mother of three children, Major-General and his civic wife – 35-year-old Olga Volovchuk – is the owner of four cars and lives in a luxurious country estate in the elite suburb of Kiev – Petropavlovskaya Borshchagovka.

On the estate, in which Volovchuk lives, in addition to a large two-story house, there is also an economic building, an indoor swimming pool and a gazebo. For similar facilities in the area now ask for up to 10 million hryvnia.

According to journalists, Olga Volovchuk also owns a land plot, which is located nearby and on which construction is actively conducted.

Officially, the general’s wife of the SBU is still registered in her parents’ apartment in the town of Varash in the Rivne region. In the same place on it the firm specializing on trade in pharmaceutical preparations is registered.

The journalists went to Varash to see Olga’s business on their own eyes, but they could not find it. All are registered in the same parental apartment, and, as it turned out, this firm does not conduct an active activity.

It is also noted that after the career of Pavel Demchin, the housing conditions of his parents have significantly improved.

His mother, retired Nina Demchin, over the past few years has become the owner of a three-room apartment in a new building in Rivne and a house of 170 square meters in a suburb of the regional center.

Journalists saw how a car drove out of the house in Petropavlovskaya Borshchagovka, at the wheel of which was Olga Volovchuk. Almost immediately after that Pavel Demchin came out of the estate. To the questions of the press, he said that he does not own this house, but periodically he visits it.

The general of the SBU also assured that he does not know to whom this estate belongs.

“Well, because I do not know, it was a person when we were already acquainted,” he said. Journalists, in turn, sent an official request to Demchina with a request to explain the origin of his family’s condition. After all, there were no official sources of income that would allow us to buy elite cars and real estate, neither the general nor his mother could find us.

“However, at the time of the release of the program, we did not receive an answer to our request from the Security Service,” the investigation said.