Prepared by the State Service for Financial Monitoring of Ukraine as of September 2016.

The second element of evaluation within the political-institutional component is to assess the level of corruption in Ukraine.

The overall level of corruption in Ukraine is high. According to the study, which was conducted by the Kiev International Institute of Sociology during August-October 2015, almost 2/3 of respondents indicated that they have faced corruption over the past 12 months.

In 2014 a study by the international anti-corruption NGO Transparency International, Ukraine ranked 142 position out of 175 countries with a high index of corruption in the country. Over 1 year Ukraine has managed to make only one additional point on the results of the global Corruption Perceptions Index tau 2015 Ukraine took 130 place in terms of corruption perception from 168 countries.

Show positive dynamics of Ukraine index was due to increased public condemnation of corrupt officials, the establishment of anti-corruption movement and the emergence of plaintiffs corruption. However, the position of the public to the real delay penalty takers, and increasing corruption component in the relationship between business and government do not give Ukraine a decisive step forward in terms of perceptions of corruption. 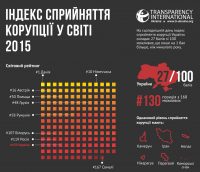 According to the Monitoring the perception of reform in society, which the company TNS conducted jointly with the National Council Reform least corrupt institutions, according to respondents, are of secondary and primary education and the police, but the most corrupt – the courts, customs, police and prosecutor’s office. 10

Fig. 1.1.4. The level of corruption in areas and institutions in Ukraine

According to sociological dolidzhen more than 1/3 of respondents in the last 3 months personally encountered corruption. More than half (54%) indicated that they understood that without a bribe situation is resolved, and another 26% emphasize that the public official, directly or indirectly bribe demanded (percentage of responses increased compared to September this year).

Compared to September 2015 the share of those who have chosen not to give bribes and trying to solve a problem officially, if the future had to deal with the situation of corruption