SBU and paranoia. Or February 17th 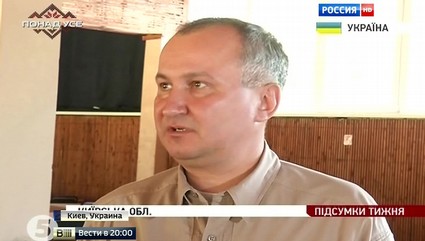 Strange changes in the SBU right in the moment of impending nix – ‘m not talking about mobilization, but rather of panic. And full disappointment “guarantor” activities SBU, primarily in the field of political investigation and “prophylaxis” of the radicals and the opposition.

Permutations, I must say, very chaotic. Duplica with a “T” for a long time to clean up going on because of drinking and incompetence. His place was taken by his Deputy “Jonanovich” Kononenko. (Rare, by the way, patronymic, which is very helps in tracing). That is strange. Because the same Boyko, who is now in Cherkasy security service political investigation experienced. Though marred in Boomerang. But that has not prevented him to lead the regional office? And very challenging and promising. But in General, this suggests that the functions of political investigation moved to another structure. Undercover work in “T” not since the Gypsy. So, only the “ears”.

Find moved. Long overdue. Prick on the boards, to sleep.

In General, all these changes will have on the work of the SBU absolutely no influence. Intraspecific struggle Hrytsak and Demchina interesting is that the couple. How and when and how one of them will shoot, and someone put.

In General Hrytsak because of the multiple “rods” was for Poroshenko “toxic”. Scandal Onishchenko is not prevented, with “Belavia” neudobno happened ( and, more importantly, completely pointless), with trump even more neudobno. Plus the growing scandal with “bass” in the area of ATO. Like any paranoid, these “rods” Poroshenko forced to think, and “rod” it? Or work on the new host? Or rather mistress. Moreover, hrycak since Faith Ulyanchenko to the “grandmothers” of caring. But far to let Gritsak do not want, as any “threat” of a person. Although you can remove if you need to cheat on someone the results of emergency “protests”. Or “bass” in the ATO. So, Gritsak now the situation is like that of a hog before Easter. Alarming, to put it mildly.

Although the Peter situation worse Governor. Paranoia is developing rapidly. You can not trust anyone. The AP sits agent Nalyvaychenko – Kondratyuk. And all the rest – agents “grandmother.” With a scythe. Which has poor Pete since 2005. And it is most alarming is the fact that the guarantor did not know, not did Yuri V. already a shortcut for the presidency from the trump. The same SBU because it was reported that Tymoshenko is not something that a close relationship and shared business with family trump. And what kind of support for Clinton was nothing more than a smokescreen.

It is likely that the current mass rotation in the SBU is a sign that the “guarantor” got really nervous and just started hysterically waving his sword. That does not help, but just makes the situation worse.

The fate of the “guarantor” are not interesting. But the consequences of incompetent activities of Poroshenko in recent years can cause another power crisis in the country. Which will certainly take advantage of the “Kremlin dwarf.” And pay for which have to our compatriots. Including their lives.