Home › News › What is the cost to book Christmas hitting the SBU?

What is the cost to book Christmas hitting the SBU? 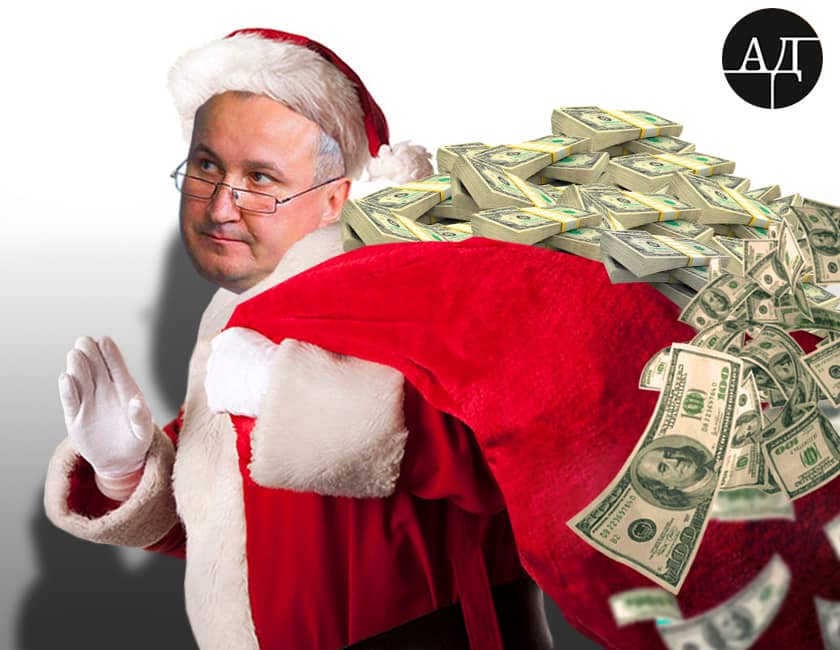 For only $ 10,000, the SBU can include you or your company in case of high treason.
To me got his hands on an interesting document which explains the mechanism of how the SBU runs into the business, what the “office” of these assaults wraps and how much it costs to order the arrival on the competition.
In late November the head of SBU Vasily Gritsak met with representatives of Ukrainian business, solemnly promising them to stop the persecution and assaults of his “office” in Ukrainian and foreign entrepreneurs.
Here’s one of his quotes:
“We will firmly and decisively to prevent attempts of illegal pressure on business, infrastructure obstacles, or any other means of obstructing the legitimate activities of domestic and foreign companies”.
Sounds nice, but the words of Vasily, is contrary to the actions led them to power structures. Whether he is disingenuous, simply playing the role of “good security officer”, or his subordinates, not really listening to his speeches and orders, populate it, “haltura” attacks on business.
To understand the reasons Sbushny dissonance I’m not going and just show you a concrete example of a registered pressure of the SBU against which the television screen is so beautiful, but it does not effectively fights himself hrycak, and Petro Poroshenko, the first of December 2017 signed the law on “Prohibition of mask-show”.
So, based on the information I received from one of the representatives of the SBU, in December 2017, one of their employees approached people asking “to be horrible to because” several specific companies in order to complicate the procedure of their cargoes at customs for several months.
According to my source, the representatives of the SBU was offered a reward in the amount of $ 10,000.
The scheme of the order of hitting SBU – for pressure of competitors or redistribution of business flows is not new. For a small proportion of the security forces simply include the desired company in a criminal case and the goods of this company when importing to Ukraine is automatically and quite unexpectedly for the owner to be distressed and almost no entry.
Full containers or trucks of goods can lie for months in customs warehouses, subjected to dozens of inspections a strange people with mysterious entities, but with the crusts of the SBU. While the product itself deteriorates, loses its relevance, and the company not knowing what was happening, losing huge sums, paying for simple storage of cargo and breaking contracts with customers and suppliers.
This nightmare usually ends once the owner of the goods “poreshat” issues or customer impact, either by the security forces, having bought them their check.
Bump for such a scheme, typically either competitors or the security forces themselves. And often companies importers, whose business is tied to strict contracts, the seasonality and freshness of goods sometimes it’s easier just to pay than to prove the illegality and absurdity of such inspections.
Now back to the case I described and the document.
If you’ve received a Sbushniki a bribe of $ 10,000, and by whom — is unknown to me, was not a witness. But on 21 December 2017, the acting head of the Kyiv customs office of the SFS Ivan Bereznuk received a letter from the Chief investigative Department of SBU which indirectly indicates that the transaction took place.
Here’s the document itself. 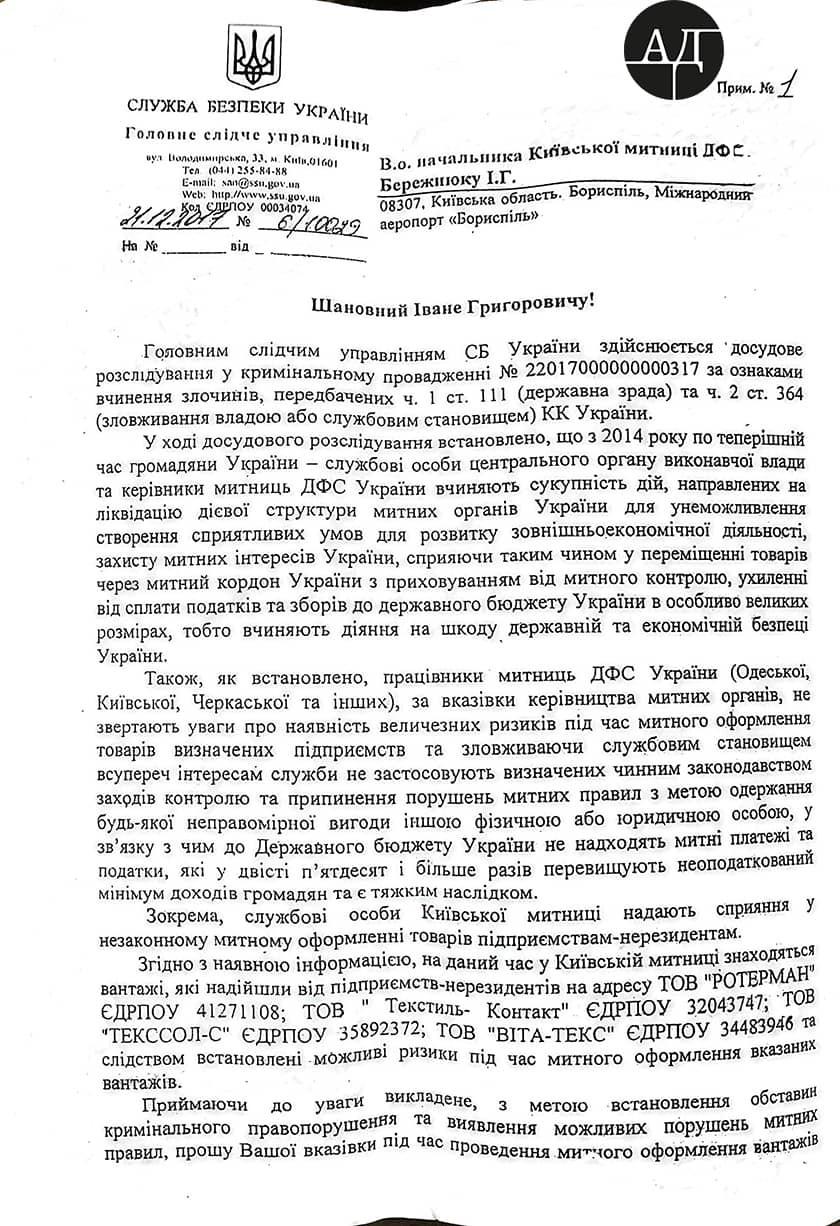 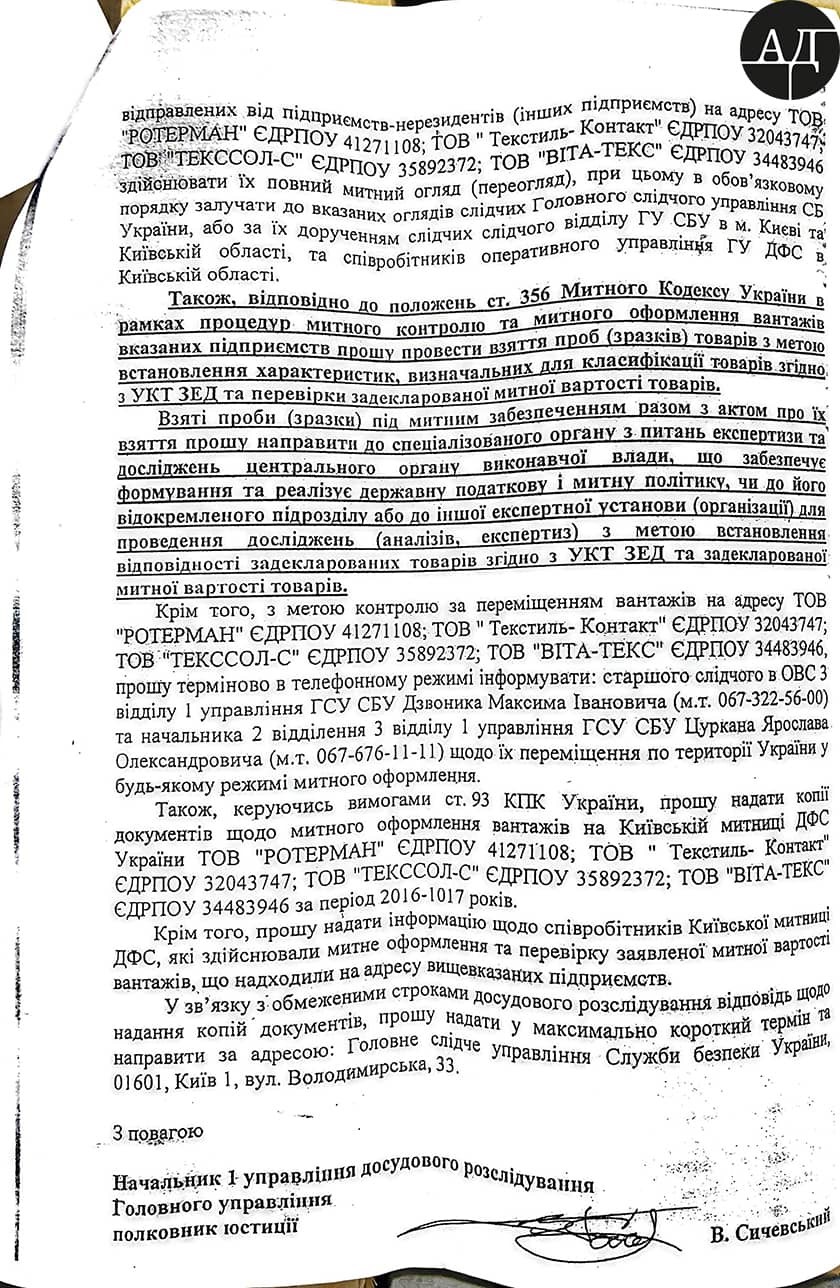 Based on the letters you can understand that investigators are investigating this structure is very important, but slightly mysterious thing, on the MCC part 1 of article 111 (sovereign zrada), and part 2 of article 364 (slaviana possess ABO sluzbowa the Outpost). Was this fact in eRDR under number 22017000000000317. The incriminated article is a serious, and pull to imprisonment for up to 15 years.
In the description of the fact investigators, in General terms, explain that from 2014 to date, some officials of the Executive authorities and heads of various departments of the custom GFS deliberately destroy themselves, the customs authorities of Ukraine and contribute to the illegal movement of goods across the border of Ukraine.
As the letter clearly stated that, acting systematically and cynically, the employees of a number of customs receives unlawful remuneration for uncontrolled passage of goods without a “clearance” than cause enormous damage to the State budget of Ukraine.
But in spite of such a vague, though beautiful introduction, head 1, of control of IC SBU Colonel Sichevsky, the signatories of this letter does not it is not a list of “customs officers and officials of Executive power” suspected of treason, nor in fact specific examples of these actions and measures for their counteraction.
Instead, after the awesome introduction, Colonel Sichevsky gives a list of four companies (TOV “ROTERMAN” EDRPOU 41271108, LLC “textile-Contact” EDRPOU 32043747, LLC “TEKSOL” EDRPOU 35892372, LLC “VITA-TEX” EDRPOU 34483946) goods which are now in the territory of the Kiev customs.
So, loads of these companies, according to the instructions of the SBU are required to inspect and peresmatrivat, mandatory to involve investigators Department of the security service, to take samples and specimens of goods, conduct a study to determine the classification of goods and compliance of the declared value.
For inspection of cargo four companies of IC SBU aside two investigators who at any time of the day should be notified by customs of the arrival, departure or any other movement of the cargo of these companies.
Only in agreement with these authorized employees and their own customs now has the right to release the goods or is required to hold under any pretext. Any movement of goods from these firms, only the team from SBU, and as you know it will not be long.
To Kyiv customs has not surprised such a strange document, and did not ask too many questions, the letter stated the following: “..slurbow individuals Kiïvskoï manic Radauti spriyannya from illegal miten oformlen products pdprimstvo non-resident.”
In fact, this means that, in case of refusal to execute the order of the SBU or try to challenge it, the staff of the customs can easily be reclassified from “friends” of the SBU in the accomplices of the criminals in the case of “treason”.
What is the custom to do in this situation? Correct, silently to complete the task and to promote SBU in the fight against state traitors.
And it does not matter that the pre-trial judge under number 22017000000000317 brand is not affiliated with these companies or with customs clearance.
And one of the firms included in the case opened in February 2017, was generally opened only in April 2017.

I wonder who is the true “state traitor”?
Vasyl Hrytsak, who is in war with Russia can not organize the work of intelligence officers by allowing them to engage in raids on businesses?
Perhaps the customs officers, who silently fulfil the dubious decrees “office” and thereby become complicit in the crime?
Or is it the businessmen who do not want someone to share profits?
I think assigning convicted correctly will still businessmen. So everything will be easier, simpler and more profitable.